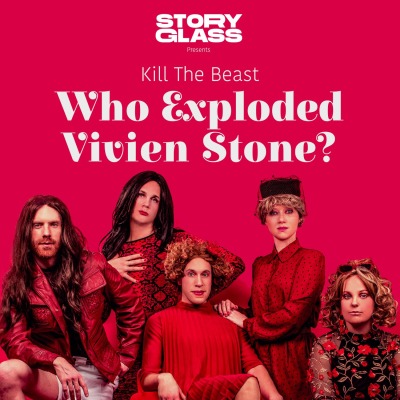 "She was all over the silver screen. Now she’s all over the walls as well."Who Exploded Vivien Stone? comes from the twisted minds and voices of the multi-award-winning Kill the Beast and is an anarchic comedy that wraps a murder mystery into a warped cinematic nightmare. Set on a troubled film set in 1973, where – in the wake of a tragedy – the genre, script and central vision are all up for grabs, the cast and crew must survive a killer on the loose who intends to make a few more brutal cuts. Who Exploded Vivien Stone? is a fast-paced, relentless adventure of shock headlines, shoot deadlines and film studio mayhem.‘Masters of comedy horror.’ Time Out‘Majestically daft and incredibly funny.’ The StageKill The Beast are David Cumming, Clem Garritty, Natasha Hodgson, Ollie Jones and Zoe Roberts. Original music is by Felix Hagan, sound design by Rich Evans and photography by Idil Sukan. The series is produced by Ben Walker for Storyglass.