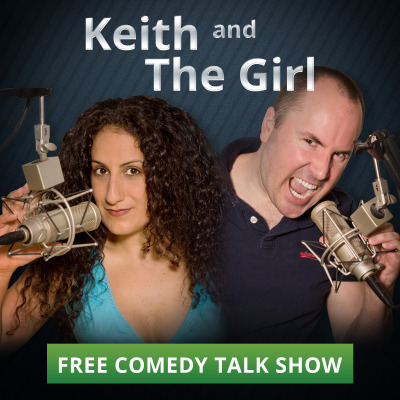 If you're easily offended, this podcast is not for you. Keith and The Girl (KATG) is a fast-paced comedy show that talks about EVERYTHING. Hosts Keith Malley and Chemda (who are exes) talk openly about their lives including topics such as their relationships, marriage, religion and atheism, abortions, LGBT community, love, hate, fights, racism, feminism, weed and other drug use, and any comfortable or uncomfortable topic. Keith and Chemda create an aggressive but safe place for their guests to share intimate and never-been-told stories and promote a frank and hilarious atmosphere. KATG is known for their rabid fan-base. Their audience members have tattooed and, literally, branded themselves with KATG-related body modifications. Top names in the industry credit the Keith and The Girl show for being pioneers in the podcasting world. "You guys got me started to begin with. You were the original podcasting people." -Marc Maron *** The show boasts over 2,000 episodes with guests such as Gilbert Gottfried (Aladdin, Problem Child), Jim Norton (Opie and Anthony), Doug Stanhope (The Howard Stern Show, Louie), Ted Alexandro (The Nightly Show), Robert Kelly (You Know What Dude?), Myq Kaplan (Last Comic Standing finalist), Hannibal Buress (Broad City), Kevin Allison (Risk!, The State), Christian Finnegan (Chappelle’s Show, Are we There Yet?), Jesse Joyce (@midnight), Mike Lawrence (Nerd of Mouth, Conan), Eugene Mirman (Bob's Burgers), Lenny Marcus (Late Show), Matteo Lane (Guy Code), Myka Fox (Distractify), Victor Varnado (End of Days), and many others! Guests of the show have been seen on Saturday Night Live, Late Night with Jimmy Fallon, Conan, The Office, 30 Rock, Guy Code, and more. Keith and Chemda has appeared on the cover of The Village Voice and the Keith and The Girl show has been featured in The New York Times, The Wall Street Journal, Playboy, Mashable, Cosmopolitan, Maxim, Bloomberg Businessweek, New York Observer, Glamour, and more! Time Out NY named Chemda "The Queen of Podcasting." Because of their 10-year podcasting success, Keith and Chemda now offer the Ultimate Podcasting Guide, a top-selling, in-depth, step-by-step, DIY tutorial on how to start a podcast, grow your audience, and make money doing what you love. The Guide is available at UltimatePodcastingGuide.com. Download an episode of KATG. Subscribe to the podcast. Change your life. This show is guaranteed to make you laugh. L'chaim.