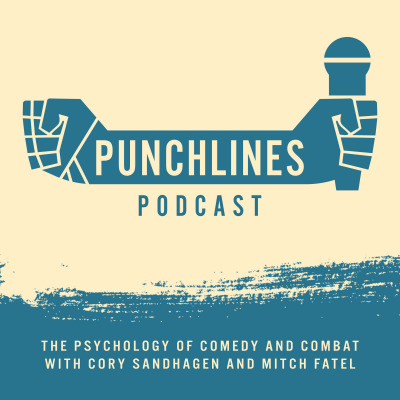 Punchlines Podcast: The Psychology of Comedy And Combat.

Mitch Fatel, veteran stand-up comedian, has teamed up with #4 UFC bantamweight fighter, Cory Sandhagen, to bring you a fresh new podcast exploring the intersecting worlds of MMA and stand-up comedy. Each week Cory and Mitch interview either a comedian or a fighter and delve into what makes these unique human beings tick. On the surface they may seem like vastly different animals, yet when closely explored, we find they are strikingly similar and inextricably linked. While one is trying to kill their opponent the other is trying to kill an audience. Both have the potential to be rewarded with adulation, respect and great riches. More often than not, both incur epic failures, public embarrassment and harsh judgements from audiences. Why would anyone in their right mind choose a profession like this? Every Tuesday a new episode will answer this question.