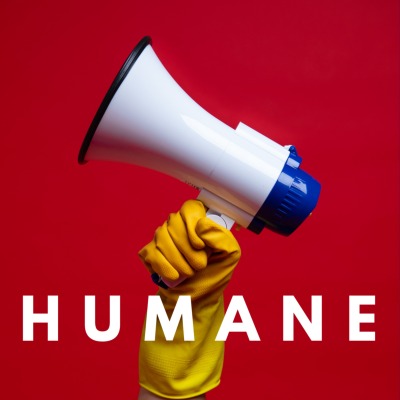 Based on the incredible true story of a small town in Essex that blockaded itself for 10 months protesting live animal exports, Humane is a timely new six-part audio drama by writer Polly Creed.1995: Brightlingsea, a small port in rural Essex.Two women, Alice and Linda, wake up to find lorries thundering through their town, carrying live animals in horrendous conditions for export. Although from very different worlds, the pair unite to try to stop the lorries. They become unlikely friends, facing arrest and police brutality amidst the protests, while also dealing with the pressures of motherhood. When one of their group dies, things start to unravel, as they face the differences between them. Timely and lyrical, Humane is a new six-part audio drama about activism, friendship and motherhood and the values that unite and divide us.Starring Marcia Lecky (The Curious Incident of the Dog in the Night-Time), Francesca Isherwood (The Worst Witch, The Catherine Tate Show), and Dr Who star, Louise Jameson, this is a timely and urgent story about animal rights, community and the issues that divide and connect us. Cast and crewWritten by Polly CreedDirected by Imy Wyatt CornerProduced by True Name Productions and John Ainsworth Sound design - David RoocroftOriginal music by Tingying DongAlice - Marcia LeckyLinda - Francesca IsherwoodBev - Louise JamesonEm - Rose ReadeMichael - Esmonde ColeBeryl - Margaret AshleyMark - Luke BartonRalph -Graham SeedOther parts played by members of the cast. Hosted on Acast. See acast.com/privacy for more information.