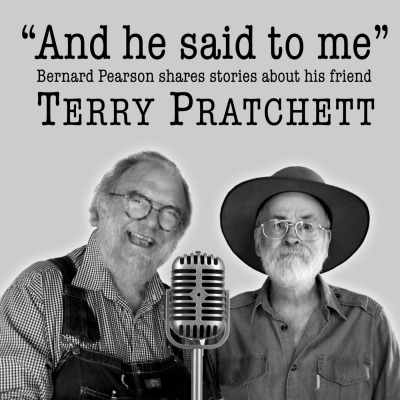 And He Said To Me

Episode 1 released: 22nd December. Although Terry left the party early, in March 2015 the echoes of the conversations we had, the jokes we shared and the drinks I brought, still rattle around in my head. So, with help from some friends, I’m sharing them. Stories about great men sometimes miss out the human being underneath. Terry was a world-famous author and a genius. He also possessed a wonderful sense of humour. Sometimes delivered in the same way you wrap an iron bar in a sock. In his case, thankfully, it was often a rod of irony rather than heavy metal. I enjoyed his company and I think he did mine, mostly. I was his ‘warm up act’ the stout party on the stage first. The bugger of it is, he’s left the stage and my fool’s bladder isn’t what it used to be. But anyway, no matter how frequently I need to micturate, I can still sit in front of a microphone long enough to tell you some of my stories. Only the names have been changed to protect the guilty and it may contain nuts. I hope you enjoy them.