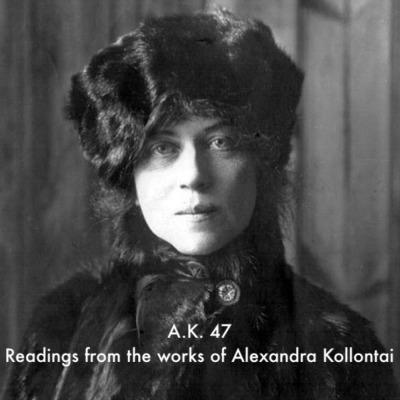 A.K. 47 - Selections from the Works of Alexandra Kollontai

Kristen R. Ghodsee reads and discusses 47 selections from the works of Alexandra Kollontai (1872-1952), a socialist women's activist who had radical ideas about the intersections of socialism and women's emancipation. Born into aristocratic privilege, the Russian Kollontai was initially a member of the Mensheviks before she joined Lenin and the Bolsheviks and became an important revolutionary figure during the 1917 Russian Revolution. Kollontai was a socialist theorist of women’s emancipation and a strident proponent of sexual relations freed from all economic considerations. After the October Revolution, Kollontai became the Commissar of Social Welfare and helped to found the Zhenotdel (the women's section of the Party). She oversaw a wide variety of legal reforms and public policies to help liberate working women and to create the basis of a new socialist sexual morality. But Russians were not ready for her vision of emancipation, and she was sent away to Norway to serve as the first Russian female ambassador (and only the third female ambassador in the world).In this podcast, Kristen R. Ghodsee – a professor of Russian and East European Studies at the University of Pennsylvania and the author of Why Women Have Better Sex Under Socialism: And Other Arguments for Economic Independence (Bold Type Books 2018) – selects excerpts from the essays, speeches, and fiction of Alexandra Kollontai and puts them in context. Each episode provides an introduction to the abridged reading with some relevant background on Kollontai and the historical moment in which she was writing.