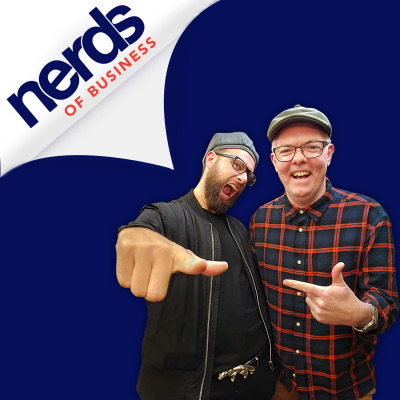 Why do some ventures fail, while others grow like crazy? Is there a magic formula for business success, and if so, what is it? In a documentary-style quest for answers, host Darren Moffatt talks to some of the best brains in marketing, advertising and technology. (In the first season alone, Darren has interviewed seven guests from companies worth a combined $2 billion!) Together, each Tuesday fortnight, these ‘nerds of business’ attempt to crack the code by solving key entrepreneurial challenges – one problem at a time. Along the way, you’ll hear amazing true stories and get valuable insights and strategies to power your own sales growth. You'll also have fun; each episode includes uniquely entertaining segments such as 'Nerd Under Pressure' and 'The Nerdometer'. Whether you’re a start-up CEO, a marketer seeking inspiration, or a small business owner hungry for growth, this podcast is for you. About The Host... Darren Moffatt is an award-winning business person who is passionate about entrepreneurialism. He is a recognised leader in both the financial services and digital marketing industries, and over a period of twenty years has helped hundreds of businesses grow. He was one of the youngest bank managers ever, when he was appointed at just 25 years old. This gave Darren his first direct experience of small businesses and the important role they play in local communities. After further corporate roles for an insurer, and for funds manager Challenger, he launched his first start-up in 2006. Three years later Darren was awarded ‘Broker of the Year’, and Seniors First remains today the largest reverse mortgage brokers in Australia, and has originated in excess of 2,000 loans. In 2012 Darren co-founded a technology start-up ‘Facebook for Neighbours’ called Housenet. The social networking site was later awarded as one of the top 100 Innovations in Australia in the Smart 100 Index. Since 2014 Darren has been Director of Digital Strategy and Content at 5-star digital marketing and SEO agency, Webbuzz. Darren, his partner Ben Carew and the team, have generated 150,000+ online leads for SME’s across a diverse range of industries.   FUN FACT: Darren is also a songwriter and has had his songs played on both Australian and U.K radio!This podcast uses the following third-party services for analysis: Podcorn - https://podcorn.com/privacyChartable - https://chartable.com/privacy