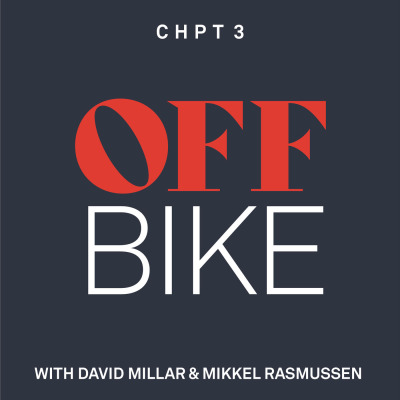 David Millar and Mikkel B. Rasmussen

OFF BIKE - A Podcast About Where Cycling Takes Us What happens when you get off the bike? Join the ex pro rider David Millar and the business anthropologist Mikkel B. Rasmussen while they explore what biking does for us beyond the ride. The question might sound banal, but it is actually not so easy to answer. David and Mikkel outline their ambitious plans for this brand new series of podcasts where they will interview a wide cross-section of people to investigate their journeys through life and how cycling has threaded through it all. . ...Mikkel, one of the founding partners of ReD Associates, is a specialist at applying human science to business problems. As the director of ReD Associates Europe, he works closely with the top management of some of Europe's most forward looking companies, including Adidas, Lego, and Novo Nordisk. In his practice at ReD, Mikkel has pioneered new thinking on how to make social science methodology practical, creative and effective in business. He is the co author of the book "The Moment of Clarity - How to Use Human Science to Solve Your Hardest Business Problems" published by Harvard Business Press in 2014 as well as numerous articles and essays. Mikkel holds a Master in Economics from Maastricht University and Master of Applied Social Science from University of Roskilde. ...David, ex professional racing cyclist, is one of the founding partners in CHPT3, a company created to serve and supply the third space in our life, the time that exists beyond our family and work. It's origins lay in cycling and that is where it is currently focussed. David has written two books, Racing Through the Dark and The Racer, as well as numerous articles and essays. He was the principal consultant to Stephen Frears during the production of The Program, and helped Finlay Pretsell make feature documentary, Time Trial. During the summer months he will mainly be found alongside Ned Boulting commentating on bike races for British television.