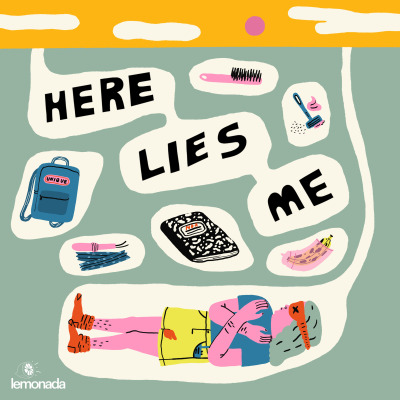 Middle school will bury you. Or at least that’s how it feels to 13-year-old Noa—a shy and witty misfit who endures the horrors of living in an affluent New England town with a dark side. It's the first day of eighth grade, and The Olivias are already icing her out. The weird kid who calls himself God publicly proclaims his love for her and then punches the guy Noa kinda sorta (definitely doesn’t!) have a crush on. Desperate to get God to leave her alone, Noa teams up with a secret club and they cook up a revenge plot to take him down. But when tragedy strikes, the line between harasser and victim becomes murky. Will Noa have to give in to being God’s girlfriend… forever? Here Lies Me from Lemonada Media is the first scripted podcast to convey the adolescent experience with realism. Author and award-winning podcaster Hillary Frank (The Longest Shortest Time) penned this fictional drama with dark humor, perfectly capturing the genuine, natural, and cringy teenage experience. It’s an immersive and sound-rich YA podcast for teen and adult fans of PEN15, Big Mouth, and Stranger Things. Performed by a talented and hilarious cast including Michael Chernus (Orange is the New Black), June Diane Raphael (Grace and Frankie), W. Kamau Bell (United Shades of America), Rob Huebel (The Descendants), Stephanie Wittels Wachs (Last Day), teen actors, and introducing Ollie Grishaber as Noa, Here Lies Me contains themes of harassment, classism, sexism, racism, trauma, consent, and finding your voice. Lemonada Premium members get early access to all eight chapters of this limited series, behind-the-scenes content, and illustrations. Subscribe today at bit.ly/lemonadapremium.