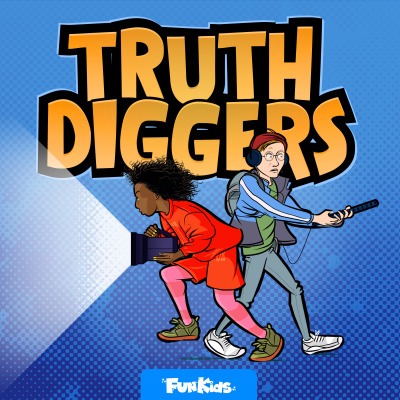 School friends Morgana and Alfie are looking into a notorious cold case: the mysterious disappearance of local eccentric Odd Colin from their Lancashire town in 1972. As Morgana and Alfie doggedly pursue their investigation they’ll encounter pirates, vampires, aliens and secret agents, and interrogate them all in order to get to the truth! Truthdiggers is a Bafflegab Production in association with Fun Kids, and is supported by the Audio Content Fund CreditsWritten by Eddie Robson Tillie Amartey as Morgana Mack Keith-Roach as Alfie Alix Dunmore as Victoria, Lily and Lucy Kathryn Drysdale as Rhiannon, Bella and Sarah Helen Goldwyn as Mary and Tiffany Jayne Griffiths as Agnes Simon Kane as as the Duke, Alfie’s Dad, Lewis, Old Man and Will Jack Lane as Alien, Blacksmith and Jake David Reed as Gregory, Uncle Paul, Lopez and Hotel Manager Richard Reed as the Captain, Mr McGuigan and Tony Swan Dan Starkey as Odd Colin, William and Richie   Becky Wright as Jane and Harriet