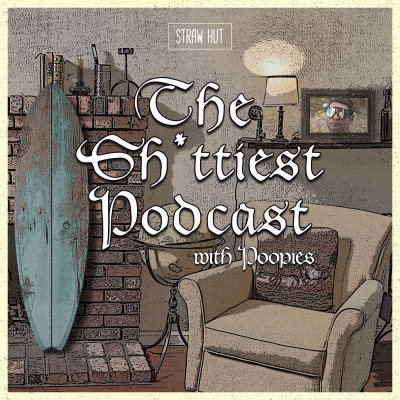 This podcast is indescribably sh*tty, but we’ll take a stab at describing it. Riding high on the success of Jackass Forever, Poopies wanted to make a podcast for all of his adoring fans. The only problem is that Poopies is, without a doubt, the worst podcast host in the entire world. Straw Hut Media felt bad for the guy, so we decided to take a risk and create THE SHITTIEST PODCAST. Just like Poopies, this podcast is a little bit all over the place, and each week you can expect a range of topics like chicks, dicks, surfing, Hawaii, stunts, music, skating, comedy, and a whole lot of other shenanigans. So now that you know what you’re getting yourself into, dive on into THE SHITTIEST PODCAST.  Produced By: Tyler Nielsen & Ryan Tillotson Written By Frank Driscoll & Tyler Nielsen  Narrated By Narrator From Straw Hut Media