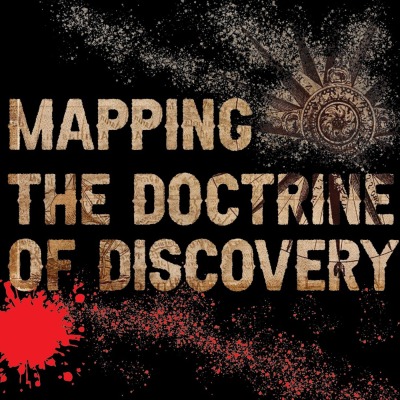 Mapping the Doctrine of Discovery

The Doctrine of Discovery Project

We launch this Podcast with Columbus’ arrival to the “New World.” This event issued forth the “Age of Discovery.” Although we were taught Columbus was in search of spices, he was actually sailing under 15th century Papal edicts known as the Doctrines of Christian Discovery [DOCD], decreeing that explorers were “…to invade, search out, capture, vanquish, and subdue all Saracens [Muslims] and pagans whatsoever, and other enemies of Christ…to reduce their persons to perpetual slavery,…[and] convert them to his use and profit…” Following the fall of Constantinople, these Papal Bulls were issued to legitimate Portugal’s exploits in extracting gold in West Africa and capturing slaves. By 1492, the Trans-Atlantic slave trade began with Columbus’ first crossing. The DOCD established the spiritual justification to bring the world under total dominion of the Church. The patriarchal hierarchy was constituted under an Almighty Supreme God at the helm—thus giving the Church full access to the world’s resources, by having dominion over Indigenous Peoples, their lands, and destruction of their cultures. These Christian decrees soon became the legal principal used during the Protestant Reformation, by giving credence to any Protestant claim to Indigenous lands in the Americas. By 1823, the DOCD was codified into US property law by the Supreme Court in Johnson v M’Intosh. As recently as 2005, Justice Ruth Bader Ginsburg upheld the DOCD in her written majority opinion against the Oneida in; City of Sherrill v Oneida Nation. Following 15th century Christian imperialism, through to the 19th century formulation of US law, we are able to identify today, how the DOCD continues to be utilized all over the world by multi-national corporations. Corporations who continue to justify resource extraction through the seizure and destruction of Indigenous lands, and who perpetrate cultural genocide through the 15th century fiction of “terra nullius”—empty land, and under the guise of economic development.The goal of this Podcast is to help identify these systems of domination that have been sustained by greed and power, through the subjugation of human beings and the natural world. https://podcast.doctrineofdiscovery.org/