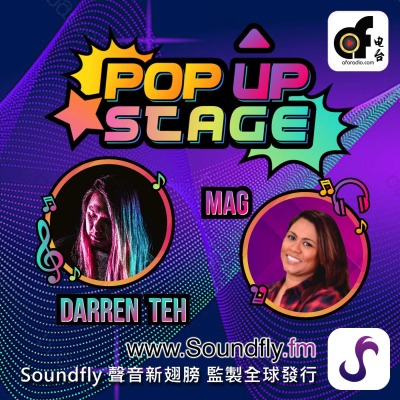 AFO Radio’s Pop-Up Stage gives exposure to the pool of talented Malaysian Artistes. It is a brand new approach whereby it is not just a radio show, but a radio show with LIVE on-ground performances held in Quill City Mall every month.  The Pop-Up Stage aims to shine a light and promote current as well as up and coming bands and their music, while bringing together Malaysians from all walks of life to get to know these bands.  The Pop-Up Stage will also be the perfect choice for those looking for an evening out to chill with family and friends in a place that provides good music & entertainment.  Hosted by MAG and An Honest Mistake's frontman, Darren Teh, the Pop-Up Stage will go on LIVE on radio every Friday at 12noon and the LIVE performance from Quill City Mall will also be broadcasted on Social Media once every month.  Mary Anne Gomes A versatile talent, MAG is always on the ball in delivering only the best, on-air and in-person. From on-air music based shows, to serious talk interviews and live coverage, there was no stone unturned and no path undone in the life of this radio presenter. In fact, one can also say that MAG’s life completely revolved around radio. Having chosen this medium as her career path, MAG also found her true love in the form of her once upon a time “on-air husband”. MAG took a break from radio in 2009, however her passion lived on and when the opportunity came around to go digital, she couldn’t hesitate. So here she is, live and real, ready to woo the likes of the new and loyal listeners at a go. So come and experience for yourself a truly down to earth, relatable and fun show with MAG on AFO LIVE, Mondays to Fridays from 11AM to 2PM. Darren Teh Darren is an English major graduate and taught English to international students (Middle Easterns, Central Asians, Chinese, Koreans & Japanese) for 6 years in a prestigious university. He lives a sporty lifestyle by playing basketball and works out regularly at the gym. He started playing music at the age of 14 in church; beginning with the bass guitar and then picking up guitar as well as drums and keyboard. He joined his first band, Army Of Three, an alternative rock band at the age of 18 (2005) as a bassist and backup vocalist. The band has since recorded 3 albums; all of which he performed and recorded. In 2010, Darren left the band to pursue An Honest Mistake. In 2014, he reunited with the band. Both bands are now running concurrently. With a passion to grow the local music scene, Darren has taken the initiative to provide a platform for new artistes. Starting in 2010 at Laila’s Café (now defunct), and mainly known for organizing at Laundry from 2011 to 2015, he has put on numerous shows promoting both local and regional artistes. His passion has also grown from organizing gigs to talent management. At present, Darren has also produced a line of guitar effects pedals called ‘AWESOME’. The Awesome Pedal which is a dual-function pedal (overdrive and boost) and The Awesome Tuner (chromatic tuner). He was inspired to create these pedals to encourage musicians to seek greater tone as well as to stay in tune. Having performed in various countries in South East Asia, Darren has the desire to establish an Asian touring circuit together with some of the best promoters in the region to promote Asian music. With an aim to bring Malaysian music to an international platform, he is constantly working at it; a step at a time. Buy us a coffee to support us : https://ko-fi.com/R5R02O6S7 Official Website : www.aforadio.com In collaboration with Soundfly - www.soundfly.fm