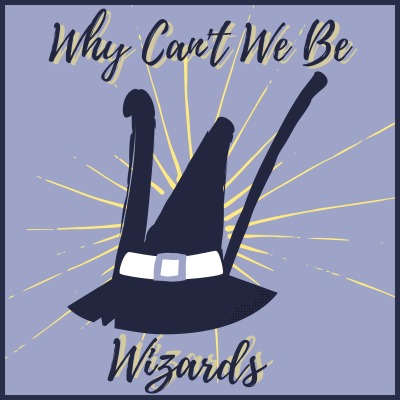 Why Can't We Be Wizards

A wizarding comedy improv storytelling podcast fated by dice. Six friends craft an original story with new characters set at a modern and inclusive Hogwarts School of Witchcraft and Wizardry. Come be wizards with us! New episodes fortnightly on Fridays. ✨ Twenty-two years after the Battle of Hogwarts and Harry Potter's triumphant victory over He-Who-Must-Not-Be-Named, five young friends retrace the steps of thousands of students to discover magic, friendship, and perhaps a bit of mischief at Hogwarts. From sorting in the Great Hall to the awarding of the House Cup, these inquisitive new wizards must discover their own destiny amid the twisting walls and moving staircases of a school full of secrets not even Dumbledore claimed to know. ✨ Why Can't We Be Wizards is an all new wizarding story improvised by Kevin Rizza, Elliot Kelley, Alie and Mike Turley, and Charlotte and Mitchell Cassidy. We play a simple tabletop roleplaying game called Witchcraft and Wizardry created by Tablestory. As game master and producer, your resident Potter nerd Kevin magically transfigures our hours of tabletop nonsense into a tight, atmospheric, story-first listening experience. Come along on an adventure with Caleb, Skyler, Allison, Leo and Freya every other Friday as they cast spells, roll dice, uncover mysteries and find themselves through their time in school.