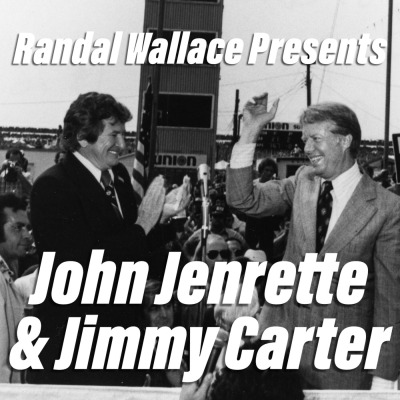 "Randal Wallace Presents "Nixon and Watergate" a three season look at the Watergate Scandal and the Administration of Richard Nixon . The show is looking back at the life, career, and Administration of Richard Nixon, as part of a much larger review of the Vietnam War through Watergate. It was the most divisive time in modern American History and we hope to take lessons from it for today. Our show has also made the largest most extensive use of the secret White House tapes of both Lyndon Johnson, and Richard Nixon, ever assembled in one place, other than the National Archives, and the Nixontapes.org website of historian Luke Nichter. We invite you to come along with us on a wild ride through the high points and low moments of modern American History, in an effort to show the citizens of today that we are an amazing and resilient nation. Originally "Bridging the Political Gap" was an 11 episode series on how to bridge the political divide our nation now faces. Based on lessons learned from the World War 2 Generation of leaders who created the American century. Over its multiple season run the Podcast has become a history show looking back at the last half of the 20th century for lessons in leadership to help us today. Our Podcasts are separated by individual Documentary style titles. -- Season 1 : Bridging the Political Gap episodes 1 -11 --- Season 2 : Lessons in Leadership : --- The GIANTS of the Senate and Joe Biden episodes 14 - 16 ---- World War 2 Episodes 17 - 20 --- General MacArthur You're Fired Episodes 21 - 23 ---- A Celebration of the life of George Shultz episodes 26 - 28 ---- November 1963 : The end of the Age of Innocence episode 29 ------The Vietnam War and Watergate Seasons 3 - 8 ----- Season 3 ----The Johnson Treatment episodes 32 - 39 ---- Upheaval 1968 episodes 40 - 50 ---- Season 4: Richard Nixon 1968 -1971 The Man Who Saved the Union episodes 51 -67 ----- Season 5 Richard Nixon 1972 The Foundation of Peace episodes 71 - 96 -----1973 Ten Days in January 97 - 100 -- Season 6 Richard Nixon 1973 : Enemies at the Gate 101 - 125 ---- coming soon Season 7 Richard Nixon 1974 Through the Fire ---- Season 8 Richard Nixon 1974 - 1994 The Fall and the Rerise of Richard Nixon. ---- In Production now on George H.W. Bush -- Plus there are commentaries, tributes, and special edition shows scattered through out our episode catalogue. (FAIR USE NOTICE : This presentation contains copyrighted material the use of which has not been specifically authorized by the copyright owner. The use of this footage is for educational and historical commentary. We believe this constitutes a fair use of any such copyrighted material.) ***** Ranked number 14 as one of the 60 best American History podcasts of 2022 by Feedspot.comhttps://blog.feedspot.com/american_history_podcasts/