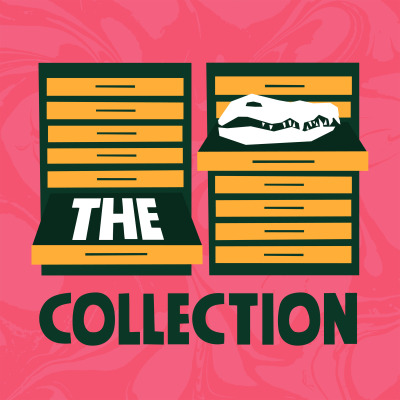 The Museum and Art Gallery of the Northern Territory

Introducing The Collection, a podcast that takes you back of house at the Museum and Art Gallery of the Northern Territory. Step inside the dry stores, lift the lid on strange specimen jars and peek inside the deep freeze as we reveal a world of fascinating objects and the stories behind them. MAGNT’s Curator of Territory History, Jared Archibald, says that “Museums collect objects, and objects tell stories”, and there’s no shortage of stories at MAGNT. Illegal hauls on the high seas, near misses during Cyclone Tracy and the accidental discovery of a strange new species are just some of the stories we unearth in this first season. Over five episodes, The Collection blends science and storytelling to showcase the rare, wonderful and unexpected objects in Australia’s  Northern Territory museum.      The Collection is a Museum and Art Gallery of the Northern Territory podcast produced by StoryProjects with production by Cinnamon Nippard and Lori Uden, music composition by James Mangohig and mixing by Hamish Robertson. Johanna Bell is the Executive Producer. Season One was created on Larrakia land in the tropical Top End of Australia’s Northern Territory with funding from National Science Week NT. Subscribe wherever you get your podcasts, and for more information visit magnt.net.au/thecollection