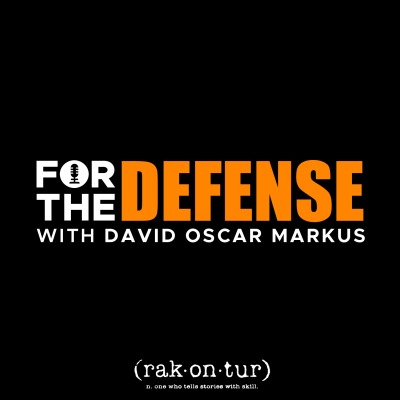 For the Defense with David Oscar Markus

David Oscar Markus, a Miami trial attorney who has been called “a reincarnation of the old school criminal defense lawyer” and has represented clients from the head of the Cali Cartel to Fortune 500 companies and their CEOs, has partnered with rakontur, the lauded storytellers behind Cocaine Cowboys, The U and 537 Votes, to launch a new podcast series called For the Defense. The podcast focuses on the work of the least-respected but perhaps the most important profession in America: the criminal defense attorney. In each episode, Markus will interview a top criminal defense lawyer about one of their most gripping trials. Sadly, the criminal defense trial lawyer is a dying breed. The Feds have manipulated the system -- which was founded on the idea of trial by jury -- to force almost everyone (occasionally including the innocent) into pleading guilty to avoid trial. If you dare to go to trial, you risk going to prison for decades longer than had you surrendered and pleaded guilty. The system has shifted from valuing and encouraging trials to punishing those who dare exercise their constitutional right to have a jury decide their guilt. In the 1980s, over 20% of cases went to trial -- now less than 3% do so. Having tried cases all over the United States, Markus is well-positioned to speak to other leading criminal defense lawyers in the country and explore with them the decision they made in a high-profile case to proceed to trial, including their trial strategy, the risks involved, and the clients themselves. In the premiere episode, available now on all podcast platforms including Apple, Spotify and Google, Markus discusses the Harvey Weinstein case with his lawyer Donna Rotunno and what it was like for her to represent the most hated man in America against an entire movement. New episodes will be available on Tuesdays. Among the highlights of Season One: How did Roy Black flip the prosecution witnesses in his favor during the trial of a police officer charged with killing a black man during an altercation in an arcade? Why did Tom Messereau initially want to call Michael Jackson to the stand but ultimately decide against it? What was going through Marty Weinberg’s head when his client, a lawyer, decided he wanted to give part of the closing argument? How did H.T. Smith deal with a judge who was wearing handcuffs as his tie-tack? How did F. Lee Bailey, just a year out of law school, land the most followed trial of the day, Sam Sheppard (the defendant who ended up being the inspiration for The Fugitive)? CONTACT: info@rakontur.com, DMarkus@markuslaw.com