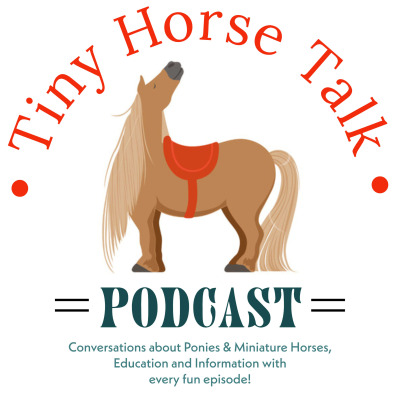 Welcome to Tiny Horse Talk, featuring conversations about ponies and miniature horses. You’ll find information and education in each episode, along with a little dash of fun! Join host Patricia Milligan of Fox Lea Farm Mini Equine Rescue, an organization dedicated to helping the littlest horses find their way home, as we dive into the world of our smallest equine friends. You'll also hear from EQUUS Film & Arts Fest Director Lisa Diersen and Producer Julianne Neal from time to time with tidbits and features from the equine media scene. Tiny Horse Talk is a collaboration between Fox Lea Farm Mini Equine Rescue, the EQUUS Film & Arts Fest and JA Media Productions. Fox Lea Farm began as a privately owned home with acreage in Barnesville, Md., upon which a beautiful barn, indoor and ring was built. As the owners brought their horses from nearby boarding barns to their new home, they had a few empty stalls. Long-time equestrian Patricia Milligan, joined by her originally non-horsey but willing to learn husband, Michael Fox, pondered what to do about the empty stalls. As all horse people know, empty stalls never remain empty for long. Having many rescue dogs over the years, Patricia was interested in dabbling in horse rescue. A chain of chatty horse friends with a variety of connections eventually let her to the Eastern Shore and a mini horse rescue in need of foster homes. Eventually those stalls became homes for a host of minis and Patricia became a champion for these littlest equines who so often found themselves in dire situations without options. Lisa Diersen is a champion for all things equine and as an avid equestrian has spent her life in the company of horses. Riding since she could sit in a saddle, Diersen has a great appreciation for all types of equestrian disciplines. She is the Founder and Director of the EQUUS Film & Arts Fest, empowering storytellers to showcase the rich history and diverse tapestry of horses in human culture through equestrian content, film, art and literature. The EQUUS Film & Arts Fest is the premiere film festival oriented around equestrian-themed content from all over the world. Screening feature films, documentaries, shorts, music videos, commercials, training educational materials, art and literary, covering all equestrian disciplines, the festival created a home for the storytellers of the horse world. Now branching into the social media and podcast venues, Lisa continues to support all things equine. Every horse has a story, its our mission at the EQUUS Film & Arts Fest to share those stories, through film, art and literature. Julianne Neal is the owner of JA Media Connections, LLC and the Coordinator of Visual and Performing Arts for The Fairfield County School District. She and partner Bruce Anderson provide equine services through The Marley Project, Inc, a non-profit 501 (c)(3) with an equine education-focused mission. The organization connects horses with individuals, educational groups, law enforcement officers and veterans, as well as with children through arts and film. In her spare time, Julianne operates Thornfield LLC, a boarding and training facility located in South Carolina where she combines her love of all things equine by riding her dressage horse, Winston. Julianne produced and directed the film, "A Pony and His Boy," a collaboration with Lisa detailing the story of Berry, a senior rescue pony, and Josh, a young man with Down Syndrome whose connection with the pony has been life-changing for Josh and all who love him. For more information about the team, visit the following sites: https://foxleamini.org http://www.equusfilmfestival.net http://www.jamediaconnections.com http://www.naturesview.us And now, let’s talk tiny horses! #tiny_horse_talk #tiny_horse_talk_podcast #equus_film_and_arts_fest #horses_are_the_healers #fox_lea_mini_horse_rescue #maryland_horse #jamediaproductions